Can cabbage boost the Environmental friendliness of lithium-ion batteries?

Image by Pexels from Pixabay


Although the economics have yet to pencil out, scientists are exploring the use of phytomining to help meet the world’s increased demand for lithium, a key component of batteries that run EVs and other modern electronics.

As the world works to reduce greenhouse gas emissions, interest in electric vehicles is increasing. This, along with the steady demand for new smartphones, computers and other electronic gadgets, is leading to an increased need for lithium-ion batteries — and, thus, lithium as well.

Traditional mineral extraction comes with a slew of issues, both environmental and social. But research out of the Institute of Technology Carlow in Ireland, published in 2018, suggests that some plants can suck lithium from the soil. As these plants grow, they accumulate and store lithium in their tissues. They could, potentially, be harvested and burned, and the leftover ash purified to extract the desired element. The process — which isn’t exclusive to lithium — is called phytomining.

Other elements have been phytomined quite successfully. In 1998 Chris Anderson, then a Ph.D. student at Massey University in New Zealand, discovered that it is possible to phytomine gold. Various groups around the world have also successfully extracted nickel from soil using plants, Anderson says.

The lithium research, conducted by a team out of the Institute of Technology Carlow’s enviroCORE research center, began in 2017 with an effort to study background levels of soil lithium near Carlow, particularly in the Blackstairs Mountains. A geological survey of the region in the 1970s showed it to be a source of the element.

Growing demand for rechargeable batteries for everything from smartphones to electric vehicles is increasing the need for lithium around the world. Photo courtesy of Kristoferb from Wikimedia, licensed under CC BY-SA 3.0


As part of this research, the team also studied which plants could accumulate lithium from the soil at high concentrations. Starting with 34 candidates, the scientists eventually whittled the list down to just three: cabbage, rapeseed and sunflower.

Why look to plants to extract lithium? A big reason has to do with environmental impacts.

Around half of the world’s lithium is dug from the ground in Australian mines. Such mines can create environmental damage, including pollution and habitat loss, although each mine is different, says Robert Colbourn, membership manager for Benchmark Mineral Intelligence, an agency that reports on the price and demand of various metals, including lithium.

Most of the rest of the world’s known lithium comes from Latin American countries like Chile and Argentina, where it occurs naturally in deposits of brine beneath the surface of the Earth. The brine is pumped above ground and evaporated, leaving behind the element in a powdered form — a process called brine extraction. 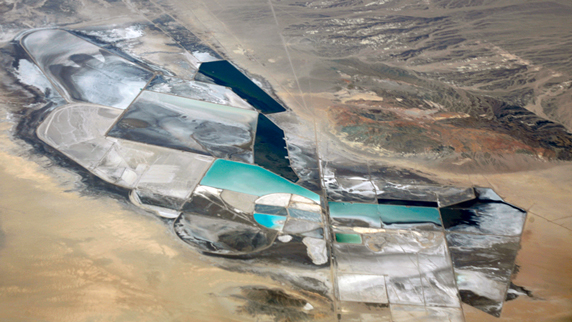 Conventional lithium mines such as this one near Silver Peak, Nevada, can place heavy demand on local water resources. Photo courtesy of Doc Searls from Wikimedia, licensed under CC BY 2.0


According to Henrik Kloo, a project manager with the IVL Swedish Environmental Research Institute, the method uses large amounts of water, a problem in areas that tend to be water scarce. According to a piece by Wired, the process is also relatively time intensive, and rising lithium prices may cause some producers to heat the brine electrically, rather than letting the sun evaporate it, making it less energy efficient.

Phytomining, which mostly involves growing plants over a large area with a high concentration of an element, could turn out to be relatively environmentally benign because it could use less heavy machinery and potentially fewer harmful chemicals than conventional extraction, depending on how people employ it. That said, it — like any innovation — would carry with it a variety of social and environmental impacts that would need to be factored into any comprehensive cost-benefit analysis.

Even though cabbage, rapeseed and sunflower can accumulate lithium in high amounts, using them as a method of extraction isn’t currently viable, says John Cleary, co-author of the Institute of Technology Carlow paper and a lecturer in chemical and analytical science at the school. Cleary says it would take the plants a long time to grow and accumulate lithium, and weather and other factors make their ability to do so unpredictable.

There are ways to amp up plants’ ability to take in lithium, however. Cleary’s team found that adding certain chemicals to the soil can help the plants draw in more of the desired element.

Even if phytomining never becomes competitive with current lithium extraction methods, it could be used in concert with them to enhance their efficiency. Further, if land managers are planting a new forest in an area whose soil has a high amount of lithium, cabbage could also be planted there, gobbling up lithium for later use for as long as the tree canopy doesn’t steal their sun, Cleary says.

Anderson has used phytomining to clean up the last scraps of gold — and contaminant mercury — after other forms of gold mining. The research out of Ireland also posits that phytomining could be used to extract lithium from places less ideal for traditional mining, like low-grade ore bodies and metalliferous soils.

“I think, depending on future prices of lithium — the more they increase, the more likely this is to become viable in certain locations,” Cleary says.

The post "Can cabbage boost the Environmental friendliness of lithium-ion batteries?" appeared first on ensia.com