1. In many parts of the world, hawksbills are threatened by hunting for their beautiful shell.

Also known as “tortoise shell," it is used by craftspeople to create many types of jewelry and trinkets. The historical hunting and killing of hawksbills for their shell nearly drove the species to extinction. Today, the Convention on International Trade of Endangered Species forbids the trade of any turtle products on the international market, including hawksbill tortoise shell. Illegal hunting and trade continue to threaten the species in many parts of the world.

Learn more about the hawksbill turtle 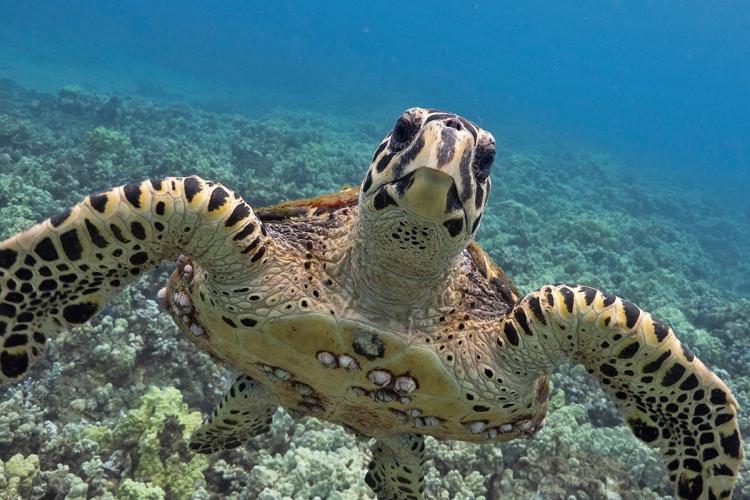 2. Leatherbacks are the only species of sea turtle that don’t have a hard shell.

Their shell (carapace) consists of small, interlocking bones beneath the skin that overlie a supportive layer of connective tissue and fat and the deeper skeleton. The carapace has seven distinct keels and the front flippers are proportionally longer than other sea turtles and their back flippers are paddle-shaped. Both their streamlined carapace and their large flippers make the leatherback uniquely equipped for long distance foraging migrations. Some swim more than 10,000 miles a year between nesting and foraging grounds.

Learn more about the Pacific leatherback turtle, a NOAA Fisheries Species in the Spotlight 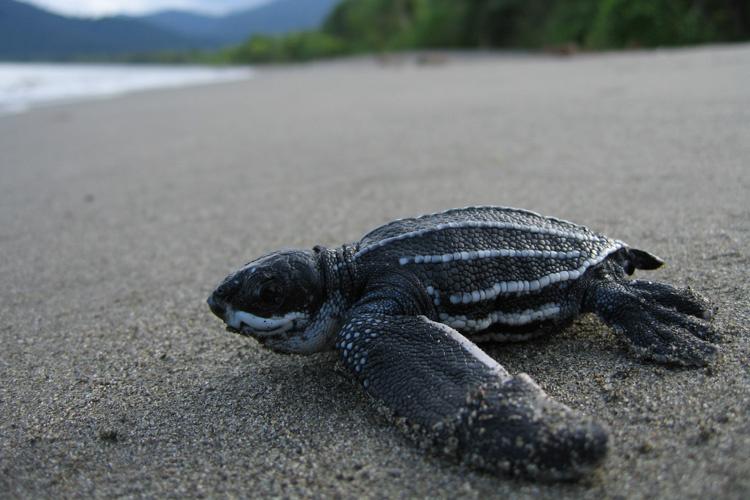 3. Sea turtle diet varies depending on the species.

Loggerheads are carnivores, only occasionally consuming plant material. Juveniles and adults in coastal waters eat mostly bottom dwelling invertebrates such as whelks, other mollusks, horseshoe crabs, and other crabs. Their powerful jaws are designed to crush their prey. Hawksbill turtles use their sharp beak to reach into small holes and crevices in coral reefs to find their preferred food source—sponges. Leatherbacks have spiny “papillae” lining their mouth and esophagus—these spines help them trap and consume their main prey species, jellyfish. Green sea turtles are unique among sea turtles in that they are primarily herbivores, eating mostly seagrasses and algae. This diet is what gives their cartilage and fat a greenish color (not their shells), which is where their name comes from. 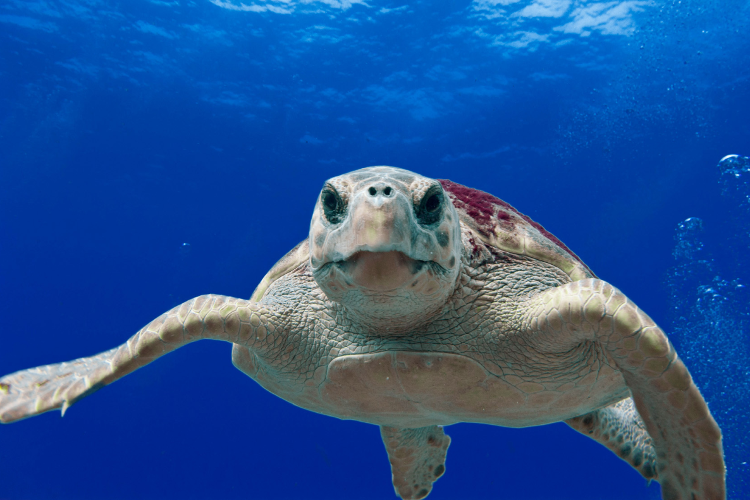 The two species of ridley sea turtles - Kemp’s ridleys and the olive ridleys—primarily nest in groups—this phenomenon is called an “arribada,” which is Spanish for "arrival." Hundreds to thousands of turtles come ashore across several hours or days and lay thousands to hundreds of thousands of eggs. This nesting behavior is designed to swamp natural predators which ensures that enough eggs and hatchlings will survive to keep the population stable. Kemp’s ridley and olive ridleys are the two smallest species of sea turtles. 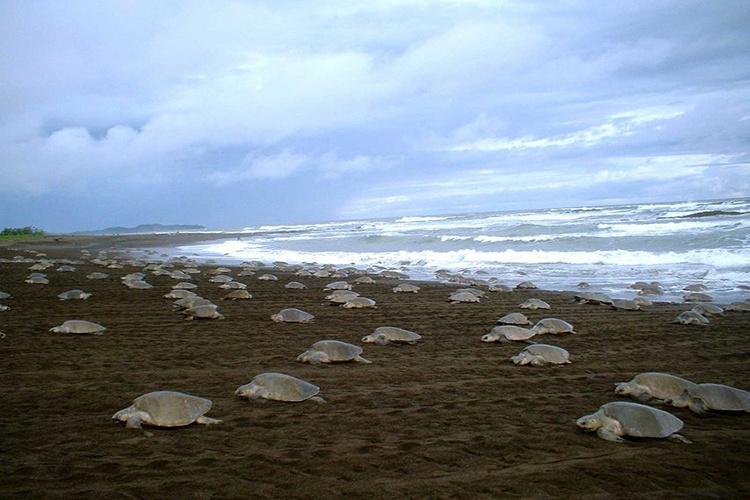 5. All sea turtles are threatened by pollution and marine debris.

Pollution of nearshore and offshore marine habitats threatens all sea turtles and degrades their habitats. The Deepwater Horizon oil spill was the largest offshore oil spill in U.S. history and affected all life stages and species of sea turtles inhabiting the Gulf of Mexico. Ingestion of marine debris is another threat to all species of sea turtles. Turtles may ingest marine debris such as fishing line, balloons, plastic bags, floating tar or oil, and other materials they can mistake for food. Microplastics are an increasing threat to sea turtles, especially young turtles living and feeding near the surface.

See what you can do to help sea turtles 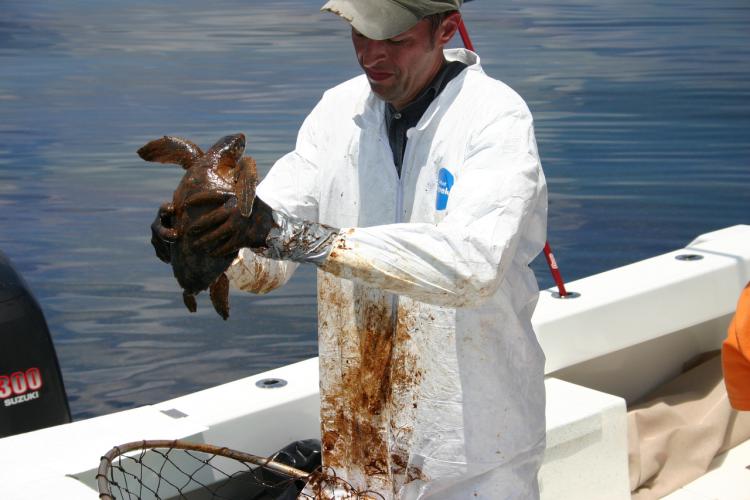 During the nesting season, green turtles will nest every 2 weeks over several months and lay 4 or more nests before leaving the nesting area and returning to their foraging grounds. Green turtles are a long-lived species and can live for 70 years or more. Female green turtles reach maturity at 25 to 35 years and will continue to nest for 30 years or more. Every 2 to 5 years they undertake reproductive migrations and return to nest on a beach in the general area where they hatched decades earlier. Over her lifetime, a female will produce thousands of eggs and hatchlings.

Learn more about the green turtle 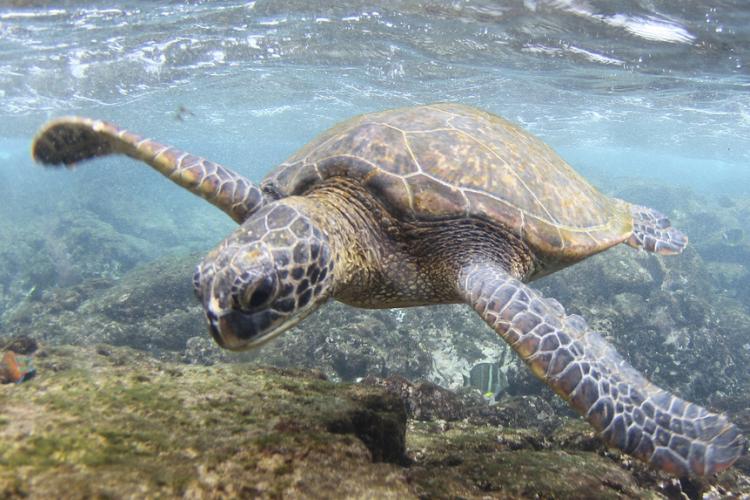 The post "7 Sea Turtle Facts for the Ocean Lover" appeared first on www.fisheries.noaa.gov